It was lunch time at the 17th Hot Air Balloon Festival in Clark and as previously planned, we intend to eat at Aling Lucing's  Sisig.

Aling Lucing's Sisig is said to be the where the dish Sisig was invented and we were all excited to experience the home of the original sisig,

All we have was an address and a phone number to locate the restaurant, I called in first and a young lady answered. I asked "Sa Aling Lucing's po ba ito" (Is this Aling Lucing's restaurant?), "Yes" the lady replied. So I asked her "Paano po ba pumunta diyan galing Clark?" (How do I get there from Clark?), I was surprised with the lady's answer she said "Hindi ko po alam" (I don't know!). Suddenly an older lady took the phone and just kept on saying hello, seems like the woman was hard of hearing.

We ditched the option of asking them for directions since they weren't able to help us and I wouldn't want to waste my minutes on such conversations.

We asked around how to get there assuming that the restaurant was famous enough for everyone to know, we were right! We followed the instructions of the people we asked how to and after two jeepney rides we arrived! 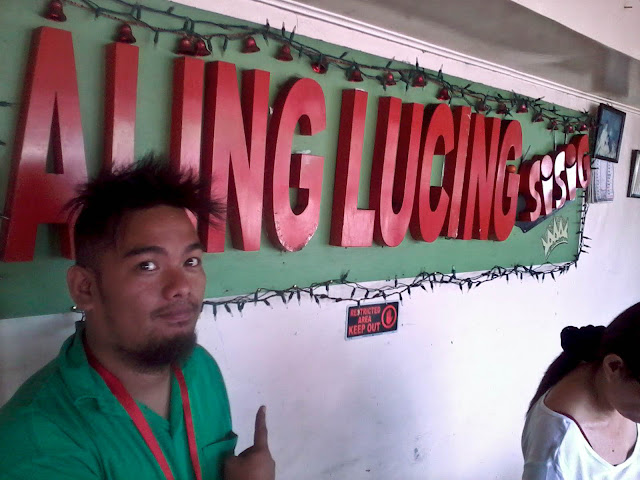 We looked for seats upstairs thinking that it would be cooler there but we were wrong. There were lesser fans up stairs and way hotter than what we expected. No one was busing the tables as well and the vacant seats were all a mess. Went back downstairs and chanced upon a group leaving so we took their seats.

The ground level was much tolerable than upstairs since the staff comes from downstairs we just wave out to them and they could easily cleaned the tables for us.

We ordered right away one sisig for the three of us and 5 cups of rice. The manager   (I think she is) asked whether we were seated already or not. I pointed to her where we are seated and then finally she took our order.

So what happened next?

We kept on following up on our order and they always tell us that it takes 30 minutes but it has been 30 minutes.

I noticed their staff going out of the kitchen and started grilling pork outside. What we feared came true that they haven't even started preparing the dish!

We asked the staff to bring out the soda first because we were really thirsty we talked a lot and even joked about how long we have been waiting. We were actually willing to wait and we were trying to understand the situation as we may not know that, that day may be more than the usual busy day for them though the restaurant was not that full.

Finally after almost an hour they started giving out the orders, this is when we reached our boiling point. The staff/cook gave the orders of those who arrived later than us rather than most of us who were waiting for almost an hour. They could have at least rewarded us with being served first right?

Well the waiting is over and here's that much coveted sisig....yeah....

We didn't really took time in taking such good pictures of it because all we wanted to do at this point was to eat. I asked Kevin if he can even taste the food, because I can't. We were so frustrated, disappointed  and hungry to even taste the sisig. But I wanted to know if it was worth the wait when it comes to the taste. So I stopped, calmed down and slowed down eating.

There really is nothing special about the taste of their Sisig. I guess what makes their Sisig make you wanna eat more is the simplicity of its preparation. They used grilled pork minced into small pieces then they heat a sizzling plate put some margarine then the Sisig itself which was the grilled pork and some onions.

I guess I would have to say to be fair is that the food is okay. But I hope that the management would understand that people go to their restaurant not because of their Sisig alone, but also for the experience of eating at the real home of the dish. That is what's more important.

Some suggestions to the management

Sanitation
Hope you could make the area cleaner. I've seen the floors (even at the kitchen area) are quite wet and muddy, this could also be an accident hazard.
It would also help if you could assign a bus boy and let the cooks stay inside the kitchen and not serve, let the servers do that. Why because we don't want their hands to get cross contaminated.

Service and Ambiance.
It would be great if you assign numbers to tables and orders this way you can do a first come first served basis to your customers. I also saw some electric fans not working, hope you could have them repaired.

I am saying these things because I believe that places like this should be revered and preserved. A certain level of respect should be given to the status of a certain place and this restaurant deserves that but I was disappointed with what has happened. Or maybe it was partly my fault to have expected too much out of the restaurant.

I am still recommending you to eat at Aling lucing's. Just be prepared for the waiting time. Next time I'll try their franchise/branches and see the difference.

How to get there
From SM Clark take a jeep going to Crossing Angeles and ask the driver to drop you off at Aling Lucing's Sisig at Angeles Crossing.
6 comments

Labels: Experience, Where To Eat

Recently, I was given a chance to shoot for a catering business in Baliuag, Bulacan. The owners wanted to have a warm feel int he photos, thus the warm yellow atmosphere....

I'll try to post the photos from time to time along with some of the recipes that I got from the owners.

As for now, I'll be leaving you guys with a Sizzling Pork Steak and Goto Espesyal.

follow us via email and be updated with our latest food adventure.
If you'd like us to taste your food and review it email us at iandelapena [@] gmail.com 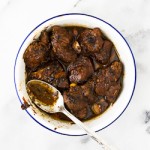